Los Muppets is the Latin American dub of The Muppets. Although the dub was produced in Mexico, the same version was released in other Spanish-speaking countries in Latin America, including Argentina, Chile, Colombia, and Uruguay, and the promotional tie-in campaign extensively incorporated celebrities from a range of Latin American countries.

The dub features most of the same voices as for recent Mexican dubs, but some of the names are simplified. For the first time in Latin America, Kermit is "Kermit la rana" rather than La rana René.

The extensive promotional campaign included unique theatrical trailers, new Spanish dubs of the Muppet viral videos, guest appearances (including Kermit the Frog on the Argentinian series Art Attack), TV spots, and more. Most of these were made available through the WaltDisneyStudiosLA (Latin America) YouTube channel. 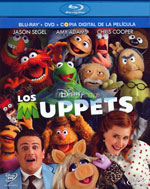 Retrieved from "https://muppet.fandom.com/wiki/Los_Muppets_(Latin_America)?oldid=1258177"
Community content is available under CC-BY-SA unless otherwise noted.