Lucero (b. August 29, 1969), is a Mexican actress, singer, and voice artitst for Jane on the Mexican dub of Disney's Tarzan.

In 2009, Lucero appeared in a H1N1 Flu PSA with Pancho Contreras from Plaza Sésamo.

Lucero appeared on stage with Kermit the Frog at the 2011 Latin Grammys. 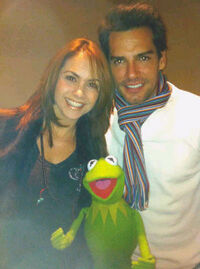 Lucero with Cristián de la Fuente and Kermit at the Latin Grammys.
Add a photo to this gallery

Wikipedia has an article related to:
Lucero
Retrieved from "https://muppet.fandom.com/wiki/Lucero?oldid=1095659"
Community content is available under CC-BY-SA unless otherwise noted.