Ludwig van Beethoven (1770-1827) was a German composer who helped to bridge what would become known as the Classical and Romantic eras in music.

During his lifetime, he enjoyed a certain amount of celebrity for his work. Today, he is highly regarded as one of the most gifted composers in history, and his music continues to appear in "popular" venues, thanks to its exposure in film, television and advertising. The man himself is also widely recognized as a figure of musical importance and has often been portrayed in biographical context as well as parody. His acclaim even outside scholarly circles is often attributed to the fact that he continued to compose in his later years as he slowly lost his hearing. He most famously composed the entirety of his Ninth Symphony ("Ode to Joy" -- one of the first symphonies to incorporate a chorus) while completely deaf. Sawing off the legs of his piano to bring the instrument closer to the floor allowed him to feel its vibrations, since he could not hear the notes played. He died from a long illness three years after the premiere of what would be his last completed symphony.

The Muppets are no exception to the public's recognition of his immense output of work. The Muppet Show's resident pianist, Rowlf the Dog, was a proponent of Beethoven's music, having played a number of pieces in concert -- usually to some humorous effect. Sometimes these performances were accompanied by a Bust of Beethoven which often sat upon Rowlf's baby grand piano making disparaging remarks. The Bust also appeared in the background in a number of sketches.

In episode 324, the Bust stated clearly that he was not Beethoven, merely a bust of the composer. However, in episode 405, when Victor Borge plays Beethoven's "Moonlight Sonata" and Fozzie thinks the pianist made a mistake, the Bust assures him, "No, that's the way I wrote it."

On three occasions, Rowlf has also performed a song written about Beethoven, "Eight Little Notes." Its original performance on The Muppet Show has been featured in home video compilations and was recorded for an album released years later.

In the Muppet Babies episode "Close Encounters of the Frog Kind" during the song "Practice Makes Perfect," Baby Piggy sings about "Beethoven, Brahms and Bach," with Baby Scooter, Baby Gonzo and Baby Fozzie popping up "wearing" the composers' busts as their heads, respectively.

In The Ghost of Faffner Hall, three composer busts are on display at Faffner Hall, offering advice to Fughetta Faffner. One of them is a representation of Ludwig van Beethoven.

Oscar invites Lang Lang to join the Grouch Symphony Orchestra in a rendition of Blechtoven's "9th Symphony for Two Elbows in E Very Flat Minor" in episode 4084 of Sesame Street.

On the Sesamstrasse episode 2282, Rumpel was so inspired by the great Grouch composer Ludwig van Krachhoven ("Ludwig van Noisehoven") that he wanted to write his own symphony. 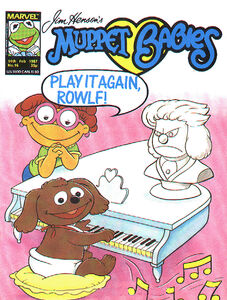 Wikipedia has an article related to:
Ludwig van Beethoven
Community content is available under CC-BY-SA unless otherwise noted.
Advertisement