Lufthansa, or Deutsche Lufthansa, is the leading (flag carrying) German airline that was founded in Berlin in 1926, and operates worldwide. In April 2014, the company launched a promotional partnership with the Muppets to promote the German-language dub of Muppets Most Wanted.

Flight attendant Piggy appears in two commercials for the airline (available both in English and German, one with guest Walter), which were filmed in the style of abbreviated flight instructions videos, and are shown before films in movie theaters, and during Lufthansa flights in April and May of 2014. Customers also receive Muppet sleeping masks, drinking straws and special Muppet flight tickets during the promotional time period, while Lufthansa counters at German airports have been dressed up with Muppet banners and other movie related decorations.

The campaign's website (available in German and English) features a five-week online competition, featuring three "games," for a chance to win the grand prize: a family round trip to Los Angeles, California, with a personal tour of the Walt Disney Studios.

In another game, one has to follow Animals lead, head-banging into a webcam. Weekly prizes: ten times two DVDs of Die Muppets.

In the last game, artwork has to be created (a drawing, a sculpture, a photo, etc.) and a photo uploaded to Miss Piggy's personal gallery. Weekly prizes: ten Muppet Fan packs (including a poster, a multicolor-pencil, a mouse pad, a notepad, a Muppets sleep mask and a Muppets drinking straw, as well as a Lufthansa backpack).

The website further offers a look at Muppets Most Wanted, the film's characters and what they like about Lufthansa, as well as a download section that provides wallpapers, coloring pages, hand puppet cut-sheets, how-to-draw pages for the Muppets, and additional videos (an interview with Kermit & Piggy, contest questions posed by the two, as well as a short version behind-the-scenes documentary of a longer 11 minute version that aired on German TV multiple times around the film's opening).

A print ad campaign featured Kermit and Piggy relaxing on board a Lufthansa flight (two versions exist, one with Kermit reading a generic newspaper, and one with the frog reading the faz (Frankfurter Allgemeine Zeitung): 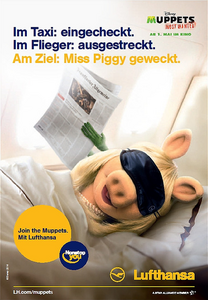 Flight attendant - an interesting profession indeed!
Question #2
Add a photo to this gallery

Add a photo to this gallery
Wikipedia has an article related to:
Lufthansa

Retrieved from "https://muppet.fandom.com/wiki/Lufthansa?oldid=1253143"
Community content is available under CC-BY-SA unless otherwise noted.