Luna is the name of the moon on Bear in the Big Blue House (and also the literal Spanish and Italian translation of the word "moon.")

At the end of every episode, Bear climbs to the attic (though, on occasion, he heads out to the Otter Pond) to talk to Luna about the day's events. Together they sing "The Goodbye Song" to close the show. More occasionally, other characters sometimes also talk with Luna and/or sing "The Goodbye Song." Bear and Luna are old friends. Luna often knows just what Bear's thinking and sometimes speaks in unison with him. Because she is very old, Luna is full of wise advice.

Luna undergoes a slight appearance change in the fourth season of the show. Her coloring is more yellow. 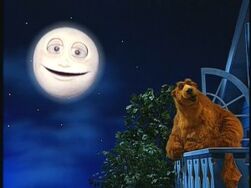 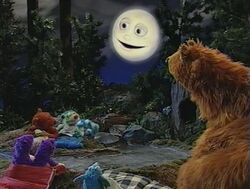 Add a photo to this gallery
Retrieved from "https://muppet.fandom.com/wiki/Luna?oldid=1308395"
Community content is available under CC-BY-SA unless otherwise noted.