Lyle Conway is a sculptor and designer who began his career with the Muppet Workshop. Conway soon gravitated to what would become Jim Henson's Creature Shop, contributing heavily to Dreamchild and The Dark Crystal. He also worked on the non-Creature Shop Return to Oz, which features several Henson alums, performing the voice and face of the Gump.

Conway soon struck out on his own as a freelance, working on such films as Link, the 1988 version of The Blob, and The Murders in the Rue Morgue. However, his most notable post-Henson credit was his reunion with Frank Oz on Little Shop of Horrors, designing the new version of Audrey II in all of its different phases. This earned him an Academy Award nomination for Best Visual Effects. 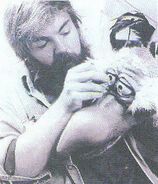 Lyle Conway, from Of Muppets and Men, working on Dodo
Add a photo to this gallery

Retrieved from "https://muppet.fandom.com/wiki/Lyle_Conway?oldid=1146910"
Community content is available under CC-BY-SA unless otherwise noted.