Ma Gorg is the mother of the Gorg family, and the self-proclaimed Queen of the Universe on Fraggle Rock. She is married to Pa Gorg, and they have a son, Junior. Her mother was Queen Esmerelda, as mentioned in "Blanket of Snow, Blanket of Woe."

The most sentimental member of the family, but also the most commanding, Ma, through threats of tears or nagging, can generally compel Pa to cave in to her whims (said whims usually delegated to Junior). However, Ma is truly nurturing and loving towards her little family, and a first-class Gorg cook and seamstress. She has a fear of Fraggles, evocative of the stereotype of housewives and mice. However, on rare occasions, as in "A Friend in Need," her motherly instincts and desire to help overcome her fears.

Ma is performed by two puppeteers: one person in the Gorg costume, and another performing the voice and moving the character's eyes and mouth by remote control.

Trish Leeper performed Ma's body throughout the series' run. In the first season, Myra Fried performed her voice and face. Cheryl Wagner took over the character from season 2 on. 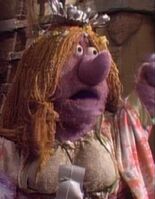 Ma Gorg, as seen in the first episodes of Fraggle Rock. Her long bangs were initially radio-controlled so that they could move sideways to cover or expose her eyes. This effect was later replaced with blinking eyelids 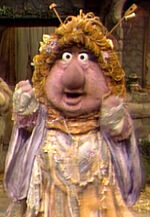 Ma Gorg is given a facelift; she carries a slight smile on her face (compared to the original puppet's visible frown), her skin becomes brighter, and her hair is set in a bun.