Maak Er Wat Van! (Make Something Out of It!) features sixty minutes of "talking, singing, watching, tinkering, smelling, playing, listening, thinking and feeling" with Bert and Ernie. The material on this record was never used on the TV show.

Right in the middle of the Bert and Ernie Theme Song, Bert has to go to the bathroom. When he returns, trouble begins: Bert wants to read his newest book of Zipje and Zopje stories (a present from Uncle Rudolf), but Ernie would rather play the trumpet. When Ernie offers to help him turn the page (because Bert is too busy putting his fingers in his ears), he accidentally tears it out of the book... to which Bert threatens to make an ugly scratch on Rubber Duckie. But they forget about their fight when singing a song about what to do with your old toys when they're broken. Bert shows Ernie how to make a musical instrument out of paper, and Ernie demonstrates how to make a kazoo from a comb. They discuss what makes them happy or sad, and Bert reads his Zipje and Zopje story out loud. Sadly, he has to stop, because it's his turn to do the groceries.

While Bert is out the door, Ernie tells the kids at home how to make paper snow, which he throws all over Bert when he comes back in. This leads to a discussion and a song about the weather. Bert tells Ernie he slipped on a banana peel, and Ernie tells him about the day he fell down and could not get up anymore. Inspired by the term "Always look on the bright side", Ernie uses a football and a flashlight to see how the sun revolves around the earth. At the end of the album, Bert and Ernie tell the story of their silly friend Oscar the Grouch. They would love to be his friends, but he always hides whenever they come near him. During the song, Oscar comes in to wait for Grover, who invited him for a playdate. 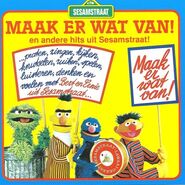 Retrieved from "https://muppet.fandom.com/wiki/Maak_Er_Wat_Van!?oldid=1160923"
Community content is available under CC-BY-SA unless otherwise noted.