Ben Haggerty (b. 1983), known by his stage name Macklemore, is an American rapper who has significantly collaborated with producer Ryan Lewis. Macklemore's and Lewis' single "Thrift Shop" reached number 1 on the U.S. Billboard Hot 100 chart in 2013, selling more than 2.2 million copies. Their second single, "Can't Hold Us" also peaked at number 1 of the Billboard Hot 100 Chart, making Macklemore and Lewis the first duo in the chart's history to have their first two singles both reach number 1.

Macklemore appeared in YouTube's 2013 end-of-year video, entitled "YouTube Rewind: What Does 2013 Say?," performing his song "Can't Hold Us" on the set of Sesame Street alongside Grover. (YouTube)

Macklemore appeared as "Mucklemore" in a season 45 episode of Sesame Street performing a Grouchy parody of his song "Thrift Shop." 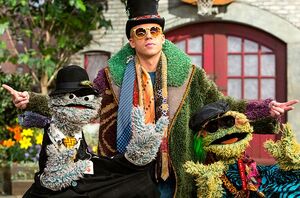 Wikipedia has an article related to:
Macklemore
Retrieved from "https://muppet.fandom.com/wiki/Macklemore?oldid=1095749"
Community content is available under CC-BY-SA unless otherwise noted.