A long standing tradition of the holiday season are the window displays of retail businesses in New York City. Among the most elaborate of those displays are the windows of Macy's Department Store.

In recent years, Macy's windows are not only adorned for the Christmas season, but also year round. Many of these displays feature items exclusive to Macy's, or promotions for television events, Broadway shows, or feature films.

Over the years, the Muppets have appeared in poser-form on a few occasions. Among those were windows to celebrate the premiere of It's a Very Merry Muppet Christmas Movie, and The Muppets' Wizard of Oz.

The theme for the 2001 windows was Macy's own Thanksgiving Day Parade. A replica of the Big Bird balloon was featured in one of the windows. Flying past onlookers while the Rockettes danced below.

Seven animated holiday windows were unveiled November 22, 2002 in New York City. The extra special guest for this event was Kermit the Frog. Kermit helped usher in the holiday season by unveiling the seven front window displays that appeared on 34th Street and Herald Square side of Macy's. These windows served to promote the NBC airing of It's a Very Merry Muppet Christmas Movie, the new Kermit the Frog balloon which premiered that year at the Macy's Thanksgiving Day Parade, and a plush Kermit available exclusively at Macy's (based on the new balloon).

The seven scenes depicted were: Miss Piggy and Kermit watching their new movie on a big screen television, Santa's sleigh arriving at Macy's Herald Square, the Statue of Liberty, a carriage ride through Central Park, Rockefeller Center, the The Muppet Theatre, and New Year's Eve in Times Square.

Each window also featured a small place card with a poem describing the scene, which is often done for the window displays.

Miss Piggy, Foo Foo, and Kermit are seated in front of a television which is showing clips of their new movie (as well as scenes of the parade). The window is set up like a living room, complete with a Christmas tree. Miss Piggy is holding a calendar noting the date of the premiere airing of the special.

This window was next to the main entrance of the building, and above the main doors a large balloon version of the Kermit the Frogtographer plush looked down on shoppers.

Kermit and Miss Piggy ride through Central Park in a horse drawn carriage. Riding with them is a shopping bag from Macy's, filled with Piggy's purchases.

Among the Muppets playing in the snow are Penguins building snowmen, Squirrels, and other park creatures.

The poem read, "T'was the night before Christmas and all through Central Park, Miss Piggy kissed her Kermie. Thank goodness it was dark..."

The window poem read, "At Rockefeller Center Skating Rink the whole world comes to skate! Chickens, Penguins, Rizzo the Rat, and Gonzo the Great! So take this holiday advice: Put on your skates, throw off your cares, and take to the ice."

Window 4 - The Dance Hall Miss Piggy, in her Saltine outfit from It's a Very Merry Muppet Christmas Movie, is center stage, backed by a line of legs from dancing girls which are visible from the rising curtain in this small scale reproduction of the Muppet Theatre.

A slew of Muppets are featured in this display. Among them are Statler and Waldorf in a recreation of their Balcony. Also seated in box seats are Beauregard, the Newsman, Pops, Lew Zealand, the Swedish Chef, and the Singing Food.

In the Orchestra Pit are various Whatnots, Muppaphones, and Monsters. A Rat is also dangling from a rope in front of the curtain.

The window poem read, "At The Music Hall, time for that fabulous holiday dance! But with Miss Piggy hogging center stage, no chorus line has a chance."

Window 5 - The Statue of Liberty In a visual reference to the movie "On the Town", Kermit, Fozzie Bear, and Gonzo are dressed in sailor outfits, sitting atop the Statue of Liberty. Beside them, Dr. Bunsen Honeydew and Beaker are conducting an experiment. Pepe the King Prawn is washing the windows which adorn the crown of the Statue, and Sam the Eagle is in the basket of a hot air balloon that is floating by.

Window 6 - Times Square Kermit is atop the One Times Square building, counting down to the new year (a role made famous by Dick Clark). Scooter is with him, filming the revelers below. The Electric Mayhem performs on an adjacent rooftop.

Animal is riding the famed Times Square New Year's Eve ball, while the Rats swing on a rope which is lowering it. Beaker is being electrocuted while plugging in the power cord to the ball.

The window poem reads, "It's New Year's Eve! Times Square! Just moments to go! Let's bring in the new year...and look out below!"

The famed Herald Square entrance to Macy's is represented here in a scaled down version. Penguins, Anything Muppets and the Elvises are gathered at the front door and atop the awning, while Santa's sleigh arrives (a recreation of the famed Thanksgiving Day Parade float).

Riding along with the Muppetized Santa are Miss Piggy, Kermit, Camilla, and Robin the Frog, who has spelled his name out with wooden blocks.

The window card reads, "Santa Claus is coming to town! It's almost Christmas day! Once he gets Miss Piggy's list, he may need an extra sleigh!" 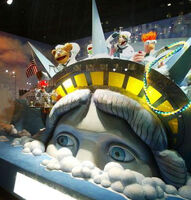 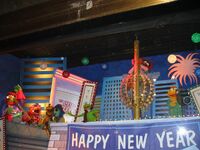 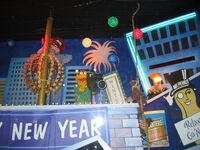 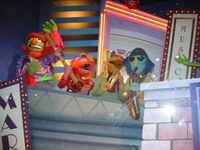 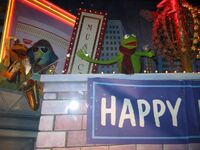 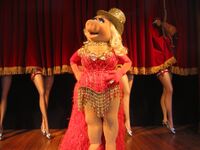 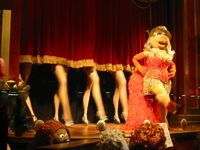 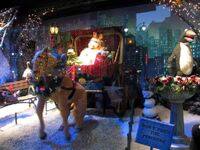 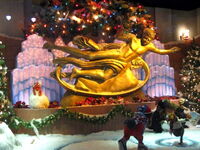 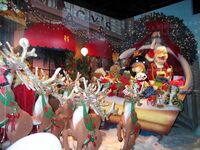 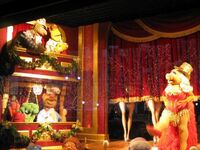 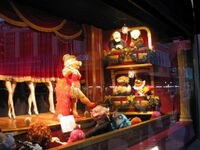 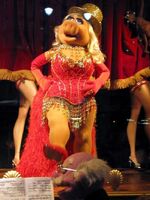 In 2004, Grover was Macy's holiday ambassador, so to celebrate that, not only the Super Grover balloon that premiered the year prior now lead the parade, A large Grover balloon sat atop of the main entrance to Macy's. The balloon was a representation of the plush Grover that was available exclusively at Macy's that year, and which was featured in less elaborate window displays (which consisted of displays of the plush Grover).

There were similar displays (including the balloon) at other Macy's stores across the country.

After it’s appearance in New York, Macy’s brought the Grover balloon over to Universal Studios in Orlando, Florida to promote their annual Macy’s Holiday Parade. It continues to be set up there for every Christmas season, along with other character ambassador balloons. 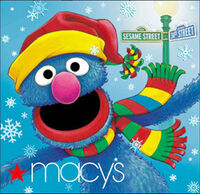 Promotional artwork for the Macy's exclusive Grover plush available for the 2004 parade. 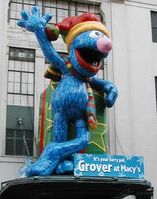 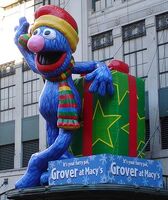 In a promotion for The Muppets' Wizard of Oz, Ashanti unveiled six windows at Macy's on March 20, 2005.

The windows were part of Macy's annual flower show, and each window featured scenes from the movie, along with fresh flowers.

Window 1 - The Muppets Wizard of Oz

Kermit sits on a park bench underneath a sign for Aunt Em's Diner reading the book "Oz for Dummies". It's a sparse outdoors scene with not much else Muppet wise, but ties into the Macy's annual flower show by displaying a vast array of flowers.

Miss Piggy, dressed as Tattypoo the Good Witch of the North, stands near a Munchkin hut and the Yellow Brick Wall.

Kermit as The Scarecrow is hanging from a cross which features a crow. Real corn stalks surround him, as well as sunflowers.

Gonzo appears as The Tin Thing sitting on some cinder blocks. Behind him is the Yellow Brick Wall and foliage.

Fozzie appears next as The Cowardly Lion, seeming to leap out at window gazers.

The Cowardly Lion, Tin Thing, and The Scarecrow stand before the Gates of Oz, and are surrounded by multiple large urns of elaborate flower arrangements. 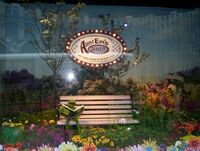 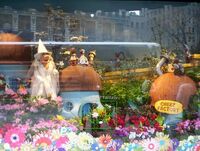 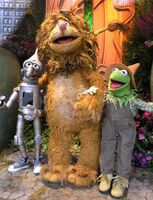 Add a photo to this gallery
Retrieved from "https://muppet.fandom.com/wiki/Macy%27s_Windows?oldid=1240018"
Community content is available under CC-BY-SA unless otherwise noted.