Madonna (b. 1958) is an entertainer whose work branches into the recording industry, modelling, acting and film production.

In 1998, archive footage of Madonna was used in Elmopalooza as one of many celebrities arriving at Radio City Music Hall in New York City to attend Sesame Street's 30th anniversary celebration.

Miss Piggy as Madonna in The Muppet Show on Tour: 2nd Edition 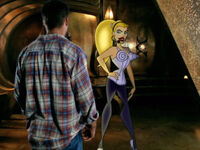 Aeryn Sun as Madonna from the Blond Ambition tour

Wikipedia has an article related to:
Madonna (entertainer)
Community content is available under CC-BY-SA unless otherwise noted.