Mae is Elmo's mother and Louie's wife. She first appeared in the 2006 Talk, Listen, Connect resource videos, helping Elmo to cope with the absence of his father while he was deployed with the military. Her name was first made known in the 2009 special Families Stand Together.

In the first installment of Talk, Listen, Connect, focusing on deployments, Louie has to leave for "lots and lots of days" to do grown-up work, Elmo and his mom keep busy passing the time until his return by keeping a daily routine. When it's finally time for her husband to come home, Elmo's mom bakes a cake and helps Elmo and his friends decorate for the homecoming.

A National Public Radio story on the video included a behind-the-scenes audio clip, recorded during a take for the scene in which Elmo's mom is reunited with her husband. The script called for an embrace between the couple, and a kiss. This soundbite illustrates the care taken between Fran Brill and Bill Barretta in determining just how long is too long for a kiss when dealing with scenes meant for innocent eyes. For this particular outtake, the performers took some liberties when the kiss had seemingly gone on too long.[1]

For the 2010 video, When Families Grieve, Mae was rebuilt with a new head, nose, and a wispier yet fuller hairdo. She also went from being a live-hand puppet to a rod-handed one. The puppet would be modified again with live hands in 2022.

Although Mae had not made many major appearances beyond the resource videos (unlike her husband), she was eventually given a starring role as the host of Mae's Minute, a web video series where she shares parenting tips. She also appears as the "grown-up" correspondent of the Elmo's World News videos.

Before Elmo's mom became a recurring character, she made a few brief voice-only appearances on Sesame Street. Her performers varied, being voiced by Stephanie D'Abruzzo in Episodes 4063 and 4070, and Leslie Carrara-Rudolph in Episode 4123. Elmo's mom also appeared in some animated online storybooks published to Sesameworkshop.org in 2005. Her design here is similar to her later Muppet appearances. In "Elmo's Special Cupcakes" and "Elmo's First Day of School," which feature spoken dialogue, Elmo's mom is voiced by Jennifer Barnhart.

Elmo's mom then made her first onscreen appearance as a puppet in the Talk, Listen, Connect video series. Performer Fran Brill named the character and modeled her light Southern accent after her mother-in-law, Mae.[2] During Brill's tenure as the character, Mae made one appearance on the series proper; a vocal cameo in Episode 4513 telling Elmo that his lunch is ready. Stephanie D'Abruzzo took over performing Mae starting with Episode 4920.

A version of Elmo's mom was seen in the "Birthdays" episode of Elmo's World. In Dorothy's imagination, she appears the same way everyone does in Tickle Me Land: as a variation of Elmo. In this dream sequence, she is called "Gladys" in homage to performer Kevin Clash's mother. 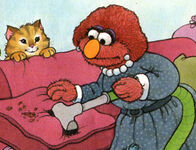 When Is My Birthday? is an example of early Elmo's mom, with red fur. 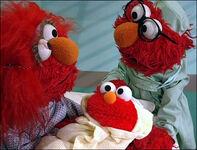 What Elmo's parents look like in the brain of a goldfish. 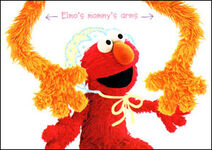 Prior to 2006, all that had been seen of a puppet version of Elmo's mom, was her arms in an Elmo's World board book. 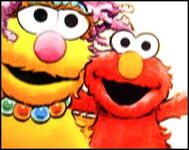 Her appearance in Smile for Elmo is indicative of the style that would be adopted for her permanent look.

Illustrated versions have varied from red to orange fur, and various hairstyles. Elmo's mom had been seen in a number of books, and like Grover's Mommy, her appearance varied widely according to the artist. In such titles as Elmo Gets Homesick and When Is My Birthday?, Elmo's mom resembles an adult (female) version of Elmo. However, in the more recent illustrations and books, the character holds true to the current version of Elmo's mom, as seen in Talk, Listen, Connect.