Magda Szubanski (b. 1961) is comedic actress, based in Australia, who made her film debut as Esme Hoggett in the Creature Shop-effects film Babe. She also appeared as Furlow in three episodes of Farscape.

Szubanski spoke warmly of her work on Babe:

“As soon as I read the script, I really liked the character. I enjoyed kids' films like Fantasia, Dumbo and Aladdin and thought it would be fun to be in one of those... I had some wonderful work with the animatronic pig. It's hard to pick the real ones.[1]”

Szubanski reprised her role as Mrs. Hoggett in the non-Henson sequel Babe: Pig in the City. Other film credits include the animated feature Happy Feet, Crocodile Hunter: Collision Course, Son of the Mask, and The Golden Compass. Prior to Babe, she worked primarily in television sketch comedy, on such Australian series as Fast Forward and The D Generation. 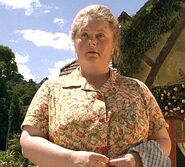 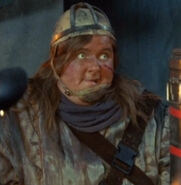 FarscapeFurlow
"Till the Blood Runs Clear," "Daedalus Demands," "Icarus Abides"
Add a photo to this gallery

Retrieved from "https://muppet.fandom.com/wiki/Magda_Szubanski?oldid=1073341"
Community content is available under CC-BY-SA unless otherwise noted.