Revision as of 18:11, 15 January 2013 by Toughpigs (talk | contribs) (her hands have been seen, that makes her a Muppet Character and not an Illustrated Character now :))
(diff) ← Older revision | Latest revision (diff) | Newer revision → (diff)
Edit

Fairy-in-training Abby Cadabby refers to her mother as Fairy Godmommy. According to a tweet by Abby, she is Cinderella's Fairy Godmother and she "majored in magic with a minor in gown design." [1] 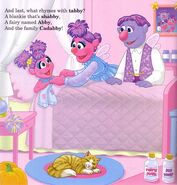