Although it was first performed in a Henson production on Sesame Street by the character who would become Bip Bippadotta and two Anything Muppet girls, the most famous Muppet rendition of the song debuted on The Ed Sullivan Show in 1969, where it was performed by Mahna Mahna and his back-up singers, the Snowths. This version of the skit was restaged many times on a number of variety shows before being featured as the opening number in the premiere episode of The Muppet Show.

Regardless of who is singing, the basics of the performance remain the same: a central character starts out conforming to the structure of the song, but falls into improvisational scat passages whenever possible. Although the back-up singers attempt to bring order back to the number, their effort is ultimately futile.

The number became popular enough that it was spoofed by the Muppets themselves in a sketch on Muppets Tonight, in which Kermit the Frog complained to his psychiatrist that the Snowths would appear every time he said the word "phenomena."

The Muppets ends with a montage of celebrities performing the classic number with the Snowths. The Muppet Show recording can be heard playing in a car in the official movie trailer. 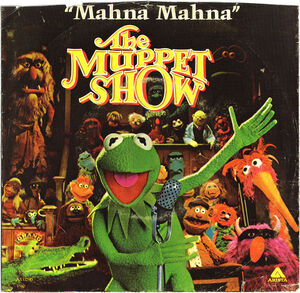 Wikipedia has an article related to:
Mah Nà Mah Nà
Retrieved from "https://muppet.fandom.com/wiki/Mah_Na_Mah_Na?oldid=1302099"
Community content is available under CC-BY-SA unless otherwise noted.