Maria Menounos (b. 1978) gained fame as the youngest correspondent on Entertainment Tonight. Since then she has guest-hosted a number of shows and played small roles in various movies.

In 2004, she met Miss Piggy and Kermit the Frog during the arrivals for the 56th Annual Primetime Emmy Awards, on which occasion both ladies accidentally wore the same dress.

On October 13, 2006, Menounos met Big Bird who she interviewed for Access Hollywood to promote the DVD box set release of Old School: Volume 1. Big Bird was performed by Matt Vogel, while the interview took place up on the roof deck of 30 Rockefeller Plaza in New York City. Quite a few clips from the set were shown, including the original version of "Bein' Green." The interview aired a week later on October 20, 2006.

Menounos appeared on Sesame Street to explain the word "senses" in a Season 42 Word of the Day segment.

She also co-hosted the 2010 and 2011 Disney Parks Christmas Day Parade. 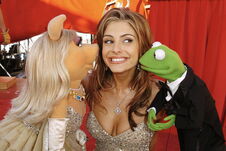 Menounos with Piggy & Kermit at the Emmys in 2004 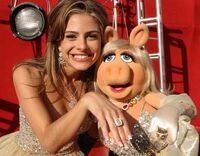 Wearing the same dress, but laughing about it.
(This photo later appeared in The Muppets episode "Pig Girls Don't Cry") 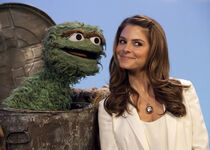 Menounos with Oscar the Grouch
Add a photo to this gallery

Wikipedia has an article related to:
Maria Menounos
Retrieved from "https://muppet.fandom.com/wiki/Maria_Menounos?oldid=1280956"
Community content is available under CC-BY-SA unless otherwise noted.