She appeared on Sesame Street during the 20th season, as a grouch groupie who signed "Just the Way You Are" while Billy Joel sang it to Oscar. The segment was included in Stars and Street Forever.

Matlin was also photographed with Miss Piggy on the red carpet for the Good Housekeeping Shine On Event in April 2010.

Matlin made her film debut in 1986, as Sarah Norman in Children of a Lesser God, for which she won an Oscar for Best Actress. She subsequently became more active on television, starring as D. A. Tess Kaufman on the courtroom series Reasonable Doubts (1991-1993) and Jocelyn Turner in the third and final season of Quantico (2018), and recurring as dancing bandit turned mayor Laurie Bey on Picket Fences, Marlee the librarian on Blue's Clues, and pollster Joey Lucas on The West Wing. Guest credits include spots on Seinfeld (as Jerry's lip-reading girlfriend), Desperate Housewives, The Practice, ER, Glee and Law & Order: Special Victims Unit. 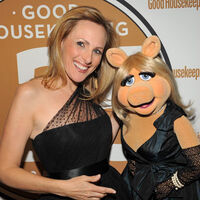 With Miss Piggy on the red carpet 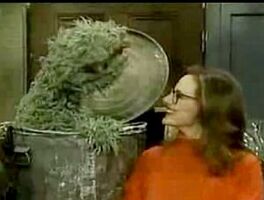 Wikipedia has an article related to:
Marlee Matlin
Retrieved from "https://muppet.fandom.com/wiki/Marlee_Matlin?oldid=1278104"
Community content is available under CC-BY-SA unless otherwise noted.