Martin Landau (1928-2017) was an Academy Award-winning film actor, whose gaunt face could connote both vileness and pathos. Landau portrayed toymaker Geppetto in the 1996 film The Adventures of Pinocchio, with the title character supplied by Jim Henson's Creature Shop. Landau later made an appearance as himself in the premiere episode of the 2014 web series, Disney Drive-On with The Muppets.

Landau's other credits range from James Mason's sinister henchman Leonard in Alfred Hitchcock's North by Northwest (1959) to Walks Stooped-Over in the epic Western spoof The Hallelujah Trail and Caiaphas in The Greatest Story Ever Told (both 1965), plus key parts in Woody Allen's Crimes and Misdemeanors (1988) and the film version of The X-Files (1997). Television credits include master of disguise Rollin Hand on Mission: Impossible (1966-1969) and guest spots on Columbo, Gunsmoke, The Outer Limits, and Without a Trace. Science fiction fans remember him best as Commander John Koenig on Space: 1999.

In animation, Landau voiced Mr. Rzykruski in Frankenweenie and the Scorpion in the 1990s Spider-Man series. 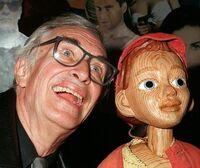 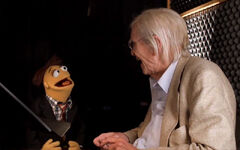 Landau and Walter have a conversation in a sound booth.
Add a photo to this gallery

Wikipedia has an article related to:
Martin Landau
Retrieved from "https://muppet.fandom.com/wiki/Martin_Landau?oldid=940218"
Community content is available under CC-BY-SA unless otherwise noted.