Martin P. Robinson (b. March 9, 1954) is a puppeteer who has performed on Sesame Street since 1981. His characters include Telly Monster, Mr. Snuffleupagus and Slimey. He is married to Sesame Street writer Annie Evans. Together, they ran the Sesame Workshop parenting blog Sesame Family Robinson.

Martin Robinson has been on staff at The Jim Henson Company since 1981. Early roles have included Mr. Snuffleupagus, Telly Monster, Slimey, and Buster the Horse, though all were previously performed by other people. He also performed Oscar's niece, Irvine, and his mother, Mrs. Grouch, and has voiced many announcers. In addition to performing, he has played an active role in hiring and training puppeteers for local Sesame Street productions in Mexico, Israel, Palestine, Egypt, Russia, and Bangladesh.

Other Henson productions that Robinson has performed in, outside of Sesame Street, have included the Farmer in The Tale of the Bunny Picnic, the animatronics for Leonardo in Teenage Mutant Ninja Turtles, and The Cat in the Hat on The Wubbulous World of Dr. Seuss.

Robinson got into the business as a member of the Bil Baird Puppet Company. According to Sesame Street Unpaved, "Martin Robinson became a performer so that he could play a wider variety of characters than his "nice guy" looks would have allowed him to play."[1]

On Sesame Street, Robinson's frequent performing partners have included Caroll Spinney (who played Big Bird to his Snuffy, and Oscar to his Telly), Kevin Clash (whose Elmo was often paired with Telly, and J. P. with Tito for "Miami Mice"), and David Rudman (Baby Bear).

Robinson has served as the assistant puppet captain for the series since the late 2010s, and has been credited on-screen as such starting with season 51.

He has twice been nominated for a Daytime Emmy Award: in 1995, beaten by Shari Lewis, and in 2009 by Kevin Clash.

Robinson and Annie Evans married on the set of Sesame Street. The pair met in 1993 at the National Playwrights Conference at the Eugene O'Neill Theater Center in Connecticut, where Martin was creating a puppet show to premiere during the conference. Martin proposed to Evans on New Year's Eve 2007, and the two were married on the steps of 123 Sesame Street in Studio J at the Kaufman Astoria Studios in Queens.

The ceremony was scripted by Evans, with Caroll Spinney as Oscar the Grouch appearing from his trash can to heckle the couple.[2] 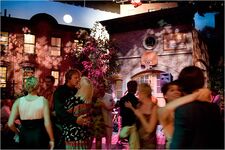 The reception on the set of Sesame Street 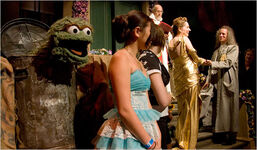