Marvel Productions was an animation studio, formed in 1981 when DePatie-Freleng Enterprises (producer of The Pink Panther cartoons) was sold to Marvel Comics. The studio co-produced Muppet Babies, the animated portions of Little Muppet Monsters, and the animated version of Fraggle Rock. At one point in 1984, the company was developing an animated series based on the Jim Henson movie The Dark Crystal.[1] The company's mascot, seen at the end of every Muppet Babies episode, was a CGI Spider-Man.

The company also produced animated adaptations of Marvel characters such as Spider-Man and the Incredible Hulk, as well as several Hasbro-toy based series, including The Transformers, G.I. Joe: A Real American Hero, My Little Pony, and Jem. The banner ended in 1993 when it merged with New World Television and became New World Animation; the remains of that division were eventually absorbed into Saban Entertainment and then Disney. 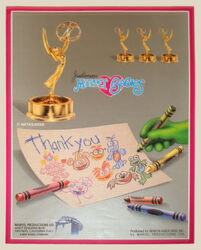 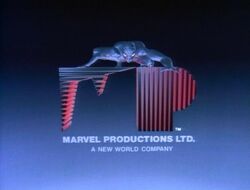 Logo at the end of Muppet Babies.

Wikipedia has an article related to:
Marvel Productions
Community content is available under CC-BY-SA unless otherwise noted.
Advertisement