Marvin Suggs and his Muppaphones were featured in series 8 of the Jim Henson's Muppets action figure line made by Palisades Toys. It was the first piece of Marvin Suggs merchandise, based on his rendition of "Lady of Spain" from episode 105 and the Muppet Show album.

Two different Marvins were produced: one regular with a colorful outfit, and a Repaint in silver and black. The regular Marvin comes with a red wall, the repaint with a black wall. The mallets fit in his hands.

Three pink Muppaphones and three orange Muppaphones are included with each figure: for the repaint, the pink ones have been painted orange and vice versa. Each Muppaphone is different. 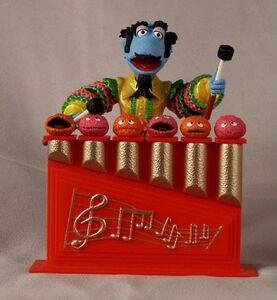 Add a photo to this gallery
Retrieved from "https://muppet.fandom.com/wiki/Marvin_Suggs_Action_Figure?oldid=1381111"
Community content is available under CC-BY-SA unless otherwise noted.