Four versions of one commercial directed by Brian Henson for MasterCard aired in 2002. They featured Kermit, Miss Piggy, Rizzo, Animal, Gonzo, Sam the Eagle, Fozzie, Pepe the King Prawn, and Rowlf the Dog in New York City amongst such backdrops as The Statue of Liberty. 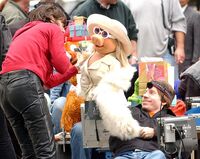