Matty Bovan (b. 1991) is a British fashion designer, illustrator, make-up artist, and contributor to Love Magazine.

He launched his own fashion line in early 2017, and has previously worked with Louis Vuitton, Mark Jacobs and Miu Miu, and designed a limited edition collection for Barbie.

In 2017, he assisted on the Muppets photoshoot with Love magazine, and posted a selfie with him and Miss Piggy. He later on December 4, 2017 was interviewed by Miss Piggy on the red carpet for the Swarovski 2017 Fashion Awards livestream. 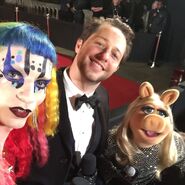 Add a photo to this gallery
Retrieved from "https://muppet.fandom.com/wiki/Matty_Bovan?oldid=1073624"
Community content is available under CC-BY-SA unless otherwise noted.