Maya Angelou (1928–2014) was a U.S. Poet Laureate, actress and raconteur. She narrated and appeared in the Sesame Street special Elmo Saves Christmas in 1996. She also appeared in several Sesame Street insert segments in the 1990s, including the celebrity versions of "A New Way to Walk" and "Sing." In other inserts she talks about 'N' words to Natasha (First: Episode 3822), plays patty-cake with Elmo while she raps about 'M' words (First: Episode 3832) and 'E' words, claps hands with Herry Monster while he says 'H' words, and sings "My Name" with Elmo and the kids.

Angelou contributed a recipe for "Jollof Rice" to Miss Piggy's 1996 cookbook, In the Kitchen with Miss Piggy.

Angelou published seven autobiographies, three books of essays, and several books of poetry, and is credited with a list of plays, movies, and television shows spanning more than fifty years. She received dozens of awards and over thirty honorary doctoral degrees. Angelou is best known for her series of seven autobiographies, which focus on her childhood and early adult experiences. The first, I Know Why the Caged Bird Sings (1969), tells of her life up to the age of seventeen, and brought her international recognition and acclaim. 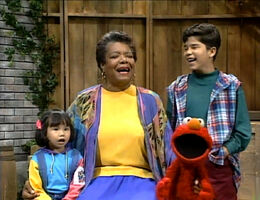 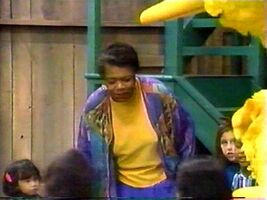 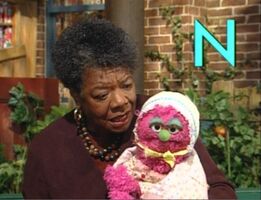 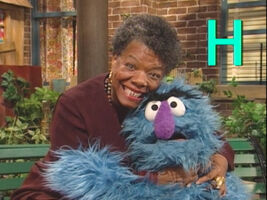 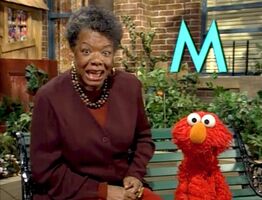 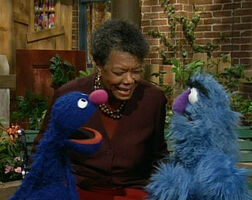 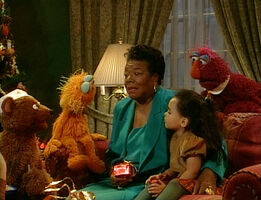 Wikipedia has an article related to:
Maya Angelou
Community content is available under CC-BY-SA unless otherwise noted.
Advertisement