Mayonnaisians are residents of the Planet Mayonnaise, as established on Sesame Street. Though the planet was often just a figment of monsters' imaginations, it was shown to be real in Episode 3214, where denizens of the planet visit Sesame Street on an important mission.

The small crew of four fly the Starship Helpless to Earth to find out why they feel so tired until lunchtime. Big Bird, Gina, and others teach the clueless aliens about the importance of breakfast, and provide them with the the necessary things they'll need to provide healthy breakfasts on their home planet (such as a cow for milk and a chicken for eggs). The alien visitors are shown not to be very bright, as their canine companion is revealed to be the one responsible for building their spacecraft.

Though not addressed in the aired episode, the crew are given Star Trek-spoofing names in the episode's script: 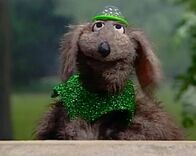 Scotty
Add a photo to this gallery
Retrieved from "https://muppet.fandom.com/wiki/Mayonnaisians?oldid=1235538"
Community content is available under CC-BY-SA unless otherwise noted.