Kermit and Mack appeared in ads for McGarry's Sausage. 30 scripts were offered, including two written especially for the commercials, but only 11 ten-second ads were produced back in 1964, and they aired from 1965 to 1968, and in 1968 the ads were rerun and some were even dubbed in French. Like the other ads for other products, the ads were very similar to the ads produced for Wilkins Coffee (1957-1961) and Claussen's Bakery (1964-1966).

Mack's agenda of pushing McGarry's Sausage intruded on the bounds of his friendship with Kermit on several occasions. Somehow, it was hilarious and struck a chord with customers. In one ad ("Wake Up"), Mack whispers to a sleeping Kermit, "Do you eat McGarry's Sausages for breakfast?" Kermit murmurs and settles back down to sleep. Undaunted, Mack replies, "You should," and produces a pistol. He fires the gun into the air, yelling, "They start your day with a BANG!" Kermit leaps out of bed, shaking and fearing for his life as he's woken up.

In the other ads, Mack bites Kermit on the arm, makes him explode, lets him drop from a high window, crushed by a giant ball, woken by gun shot, hit with a raw egg, made to disappear, electrocuted, threatened with a meat cleaver, clubbed, and finally shot. 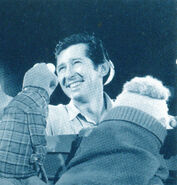 Don Sahlin A behind the scenes pic of a McGarry's commercial.
Add a photo to this gallery

These are the official titles that appear in Henson's files.

Retrieved from "https://muppet.fandom.com/wiki/McGarry%27s_Sausage?oldid=1289173"
Community content is available under CC-BY-SA unless otherwise noted.