"Me Party" is an original song from the film The Muppets. The song is sung in sequence by Mary and Miss Piggy, who are frustrated by a lack of attention from the respective loves of their lives, Gary and Kermit. The song celebrates their efforts to be strong and have fun despite their disappointment.

On the film's soundtrack, there are some extra lyrics that are not heard in the film. 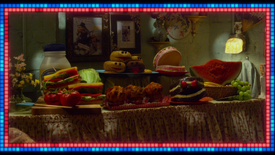 Retrieved from "https://muppet.fandom.com/wiki/Me_Party?oldid=1096063"
Community content is available under CC-BY-SA unless otherwise noted.