Melissa Dino has been with Sesame Workshop (formerly CTW) for over 15 years and has won 9 Emmy Awards for her contributions as producer on Sesame Street. She has also been a producer for numerous "Elmo's World" and Sesame Street home video titles including Kids' Favorite Songs 2, which was the winner of a Telly Award. As a producer on the show, Dino was integrally involved in both pre-production and studio production, supervising script production and writing assignments, show scheduling and the child talent department. As the producer assigned to the "Global Grover" segment, she chose and commissioned films internationally for the segment that highlight the everyday lives of children all over the world.

Currently Melissa Dino is the Supervising Producer for Sesame Street home videos. Major projects she has spearheaded include Abby in Wonderland and 40 Years of Sunny Days. Although her current focus is home videos, Melissa still retains creative input for the Sesame Street shows. She provided lyrics for the song "Dancin'". 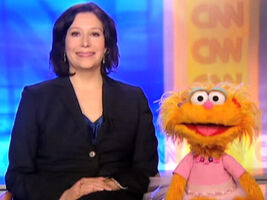 With Zoe on CNN.com Live to promote Love the Earth 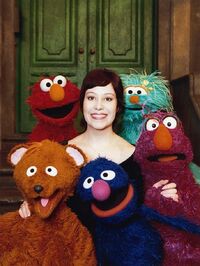 Add a photo to this gallery
Retrieved from "https://muppet.fandom.com/wiki/Melissa_Dino?oldid=1245096"
Community content is available under CC-BY-SA unless otherwise noted.