Melissa Jaffer (b. 1936) is an Australian character actress who played Utu-Noranti Pralatong on Farscape from 2002 through 2003, and in most of Farscape: The Peacekeeper Wars (with a stand-in used for later scenes). She had previously guest starred in two second season episodes, as the old version of Nilaam in "Vitas Mortis" and supplied the voice of Moya's original female Pilot in "The Way We Weren't."

Jaffer's credits include a range of similar, eccentric old ladies, from Sister Attracta in the miniseries Brides of Christ to "Crazy Old Woman" in an episode of the syndicated series The Lost World. Other TV credits include guest roles on the Disney Channel series Five Mile Creek, Matlock Police, and Snobs, and a recurring role as Eilleen Sullivan on All Saints. Film credits include the cult favorite The Cars That Ate Paris (with Bruce Spence) and My Mother Frank (with Sam Neill). 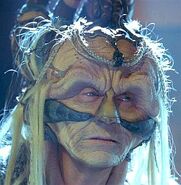 Wikipedia has an article related to:
Melissa Jaffer
Retrieved from "https://muppet.fandom.com/wiki/Melissa_Jaffer?oldid=1073672"
Community content is available under CC-BY-SA unless otherwise noted.