Memorybot is a robot featured in the 2010 Sesame Street video The Best of Elmo 2. The robot, invented by Dr. Sigmund Sillystuff, is powered on memories. When the robot loses power, he needs someone to share new memories to regain his power. These memories are then shown on a screen on the robot's back. By the end of the video, he's experienced so much with Elmo that he now has memories of his own and won't run out of power.

The same puppet was used as Rico on Sesame Street and DotBot in The Furchester Hotel episode "The Hotel Robot". 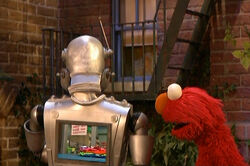 Add a photo to this gallery
Retrieved from "https://muppet.fandom.com/wiki/Memorybot?oldid=1096132"
Community content is available under CC-BY-SA unless otherwise noted.