Merggles are a race of aquatic Fraggles who live among the roots and limbs of the Great Tree in the Fraggle Rock episode "Beyond the Pond". Merggles are the Fraggle version of merfolk — the lower half of a Merggle's body is akin to a fish's tail.

When the Great Tree starts to weaken, Red confesses to the Merggles that she poisoned its roots. Mortified, the Merggles commit to journeying to a far-off lake, and lock Red away in a cage. Mervin is the last to leave, whom Red convinces to move her closer to the tree in order to communicate with her friends, in exchange for the purchase of two hats. When Gobo arrives, he confirms that the Fraggles stopped poisoning the roots, and the Merggles let Red go. Later, the Merggles visit Fraggle Rock in time for the underwater frolic. 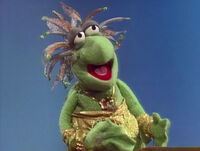 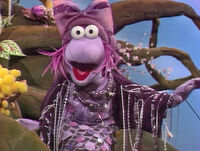 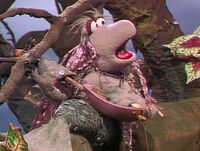 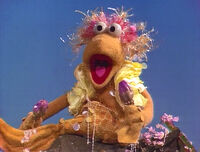 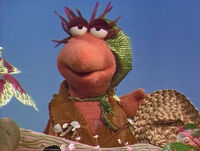 Merggles feature prominently in the reboot series Fraggle Rock: Back to the Rock. More about Merggle culture is explored over the series' story arc. Like Gorgs, Merggles are monarchical and ruled by a Queen. Merggle language is reminiscent of California surfing slang. The Merggles' most important cultural ritual is the Blue Moon Migration, which occurs once in a generation. They perform an elaborate migration dance (which the Fraggles are invited to watch) before arriving at the cavern, where young Merggles hatch, are named, and join the community. When the water supply of Fraggle Rock is polluted with impure Doozer sticks, the waste causes the Merggles to develop hiccups, interfering with their ability to breathe. The Merggles temporarily move into Boober Fraggle's laundry tubs until the crisis is resolved.