Merry Monster is a Sesame Street monster who first appeared in season 21 before becoming a recurring character from seasons 23 through 26, making only minor appearances since.

Despite her small size and meek voice, Merry can also be very loud and possesses a monstrous inner strength. Her roar is louder than that of Chicago the Lion.

Merry portrayed Grover's daughter in a 1991 edition of Monsterpiece Theater, "The Sun Also Rises." She also sang "That's the Letter O" with Queen Latifah and Prairie Dawn in season 24.

Merry was a playable character in the 1994 board game Let's Go to the Park.

Merry was introduced in Episode 2670, where she was originally scripted by Lou Berger to have been Herry Monster's sister, though she is only referenced as his friend in the final version.[1] She was performed here by Camille Bonora. The character made two more appearances in season 22, now performed by Joey Mazzarino. She appears as a main character in Episode 2854, where she proves to be very knowledgeable at football, and co-stars in the Monsterpiece Theater segment "The Sun Also Rises."

Merry's design was recycled from a small AM Monster puppet that had been used since season 20. The puppet's original design, with a few strands of hair and orange horns, went unchanged for Merry's initial appearances. In season 23, Merry was refurbished with fuller hair, more feminine eyes, and horns removed.

By season 26, Merry's presence on the show had gradually diminished, due in part to the increased prominence of Rosita and Zoe. Her few speaking roles afterward included episodes 3641 and 3707, and a Super Morphin Mega Monsters sketch. Otherwise, she mainly appeared as a background monster, mostly during season 33 as part of a group of monsters who chant "Monster time!" to segue to a monster segment.

A unique reuse of the Merry puppet was as one of the Furry Arms denizens in the video 123 Count with Me, appearing during the song "Count with Me" where she shows prominent tan horns on her head 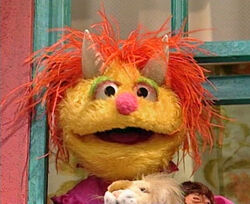