Mew is a cat toy who lives in the playroom with Rugby Tiger. Since he is a cat toy, he has difficulties being accepted in the world of "people toys". One problem is that he smells like catnip, although as he explains, "Cat toys are supposed to smell like catnip!".

A puppet of Mew went on display in The Jim Henson Exhibition at Museum of the Moving Image in 2017. 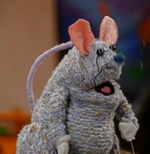 The Secret Life of Toys version of Mew