Michael Chang (b. 1972) is a former professional tennis player from the United States. He is best remembered for becoming the youngest-ever male winner of a Grand Slam singles title when he won the French Open in 1989. Chang published a book about his career, Holding Serve: Persevering On and Off the Court, in 2002. He retired from the sport in 2003.

Chang appeared on Sesame Street in several inserts, including one with Zoe, and another with Big Bird in which they play tennis together and tie their shoes (First: Episode 3145). Chang also appeared in the celebrity version of "A New Way to Walk." 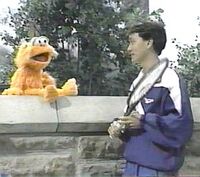 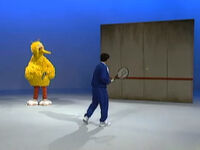 Add a photo to this gallery
Wikipedia has an article related to:
Michael Chang
Retrieved from "https://muppet.fandom.com/wiki/Michael_Chang?oldid=1148820"
Community content is available under CC-BY-SA unless otherwise noted.