Michael Jackson (1958-2009) was an internationally known pop star who came to prominence first as the youngest member of the Jackson 5 and later as a solo artist whose album Thriller (1982) remains the best selling album of all time.

Jackson appeared briefly in the 1978 TV special A Special Sesame Street Christmas, giving Oscar the Grouch a book about ghosts.

Jackson purchased the Beatles' music catalog from ATV in 1985; thanks to his purchase, a lawsuit against Sesame Workshop was dropped.[1]

During pre-production on Labyrinth, Jackson was one of several musicians considered for the role of Jareth.[2] 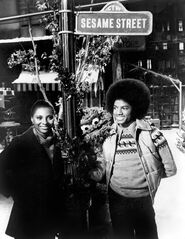 Jackson on A Special Sesame Street Christmas with Oscar the Grouch and Leslie Uggams.

Jackson with Oscar in A Special Sesame Street Christmas 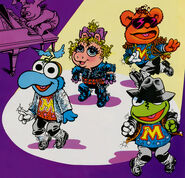 Kermit dressed as Jackson in The Muppet Show on Tour: 2nd Edition

The Big Bad Wolf in a Jackson-esque outfit 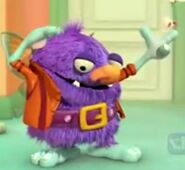 Wikipedia has an article related to:
Michael Jackson
Community content is available under CC-BY-SA unless otherwise noted.
Advertisement