Michael Michalsky (b. 1967) is a German fashion designer. He has worked for Adidas from 1995 to 2006, and was elemental in creating Kermit the Frog's Adidas outfit and sneakers.

Miss Piggy visited Michalsky's studios on January 18, 2012, while promoting Die Muppets in Berlin. At the film's press conference, the pig announced that she would attend Berlin Fashion Week, though only for a photo op, wearing a grey silk robe exclusively designed for her by the fashion designer. 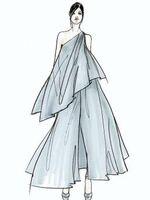 Michalsky's original design.
Add a photo to this gallery
Wikipedia has an article related to:
Michael Michalsky

Retrieved from "https://muppet.fandom.com/wiki/Michael_Michalsky?oldid=1073752"
Community content is available under CC-BY-SA unless otherwise noted.