In May 2009, Obama visited the set of Sesame Street, where she recorded a PSA about healthy eating and nutrition with Elmo. She also filmed a segment for Episode 4187 with Elmo and the Kids (including Fatima Ptacek) about planting a garden to grow fresh vegetables. Visiting the U.S. Mission to the United Nations later that day, she talked about her experience: "I never thought I'd be on Sesame Street with Elmo and Big Bird and I was thrilled. I'm still thrilled. I'm on a high. I think it's probably the best thing I've done at the White House."[1] She and her daughters, Malia and Sasha, visited the Kaufman Astoria Studios, unofficially, in March 2010.[2][3]

In 2011, Mrs. Obama appeared alongside Dr. Jill Biden, Elmo and Rosita in a series of public service announcements promoting support to military families.

Kermit the Frog appeared at the White House for The National Christmas Tree Lighting ceremony on December 1, 2011, and read "A Visit from St. Nicholas" with Mrs. Obama, which was broadcast on PBS stations nationwide.

An Anything Muppet caricature of her appears as President Elmo's First Lady in the "Elmo the Musical" segment, "President the Musical."

On October 30, 2013, Obama was joined by Elmo and Rosita to announce that Sesame Workshop and the Produce Marketing Association (PMA) joined the Partnership for a Healthier America (PHA) in a two-year agreement to help promote fresh fruit and vegetable consumption to kids.

On March 12, 2014, Obama met with Kermit again, at the White House benefit screening of Muppets Most Wanted.

Obama made another appearance on Sesame Street during Season 45, in a segment for Episode 4521 with Grover about the importance of having breakfast.

In 2015, Michelle Obama appeared on Billy on the Street with Big Bird to promote healthy eating.

Elmo and Rosita joined Michelle Obama to help harvest the White House Kitchen Garden at an event on October 6, 2016.

Obama appeared with Rosita and Zari in a social media video published on October 11, 2016 to celebrate Day of the Girl. (Video)

In 2019, Michelle Obama was honored at the Sesame Workshop Benefit Gala, receiving the Joan Ganz Cooney Award for her work with children. In her acceptance speech, Obama lauded the show and its enduring impact, and remembered her first visit to the set with her daughters. She concluded "As a child of Sesame Street, as a mother, as a partner, and as an unabashed believer in the magic you've created, I cannot thank you enough for what you all do. Congratulations again on fifty years of history, and I think we can all agree here's to fifty more." (Video) 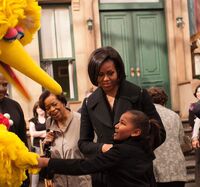 Michelle and Sasha Obama meeting Big Bird during a 2010 visit to the Sesame Street set. 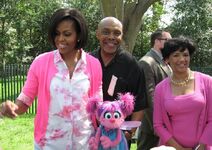 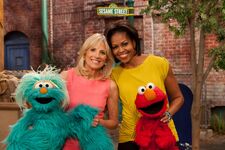 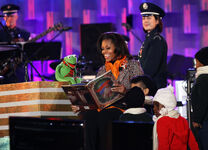 Kermit the Frog reading "A Visit from St. Nicholas" at the White House Tree-Lighting Ceremony in December 2011. 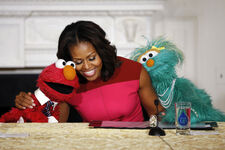 Obama with Elmo and Rosita in the State Dining Room of the White House announcing their involvement in the Let's Move! campaign on October 30, 2013. 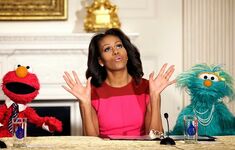 Obama with Elmo and Rosita in the State Dining Room of the White House. 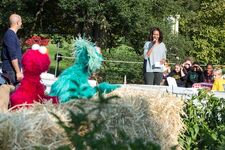 Obama with Elmo and Rosita at the annual fall harvest of the White House Kitchen Garden on the South Lawn on October 30, 2013. 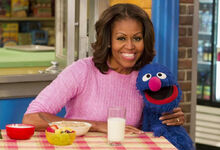 Obama with Grover in a Sesame Street segment from season 45. 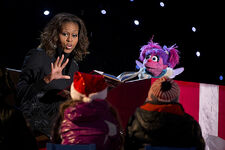 Obama with Abby Cadabby at The National Christmas Tree Lighting in 2013. 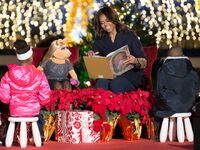 Obama with Miss Piggy at The National Christmas Tree Lighting in 2015. 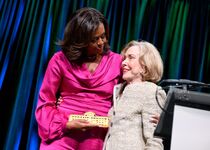 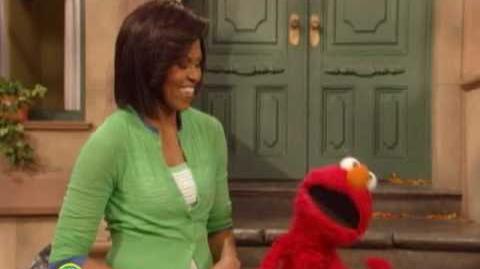 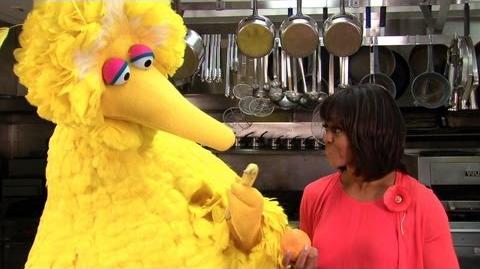 Big Bird and Michelle Obama Healthy Eating Can Be Easy! 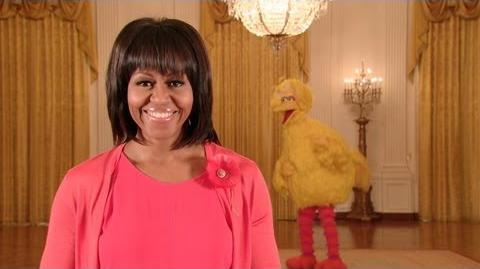 Let's Move! with Big Bird at the White House 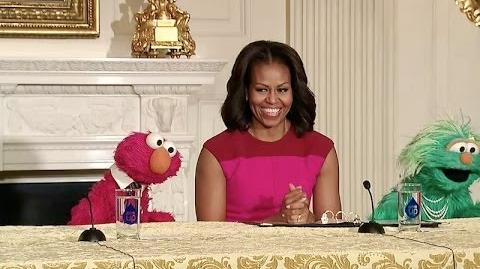 Wikipedia has an article related to:
Michelle Obama
Community content is available under CC-BY-SA unless otherwise noted.
Advertisement