Miles Robinson is the adopted son of Susan and Gordon on Sesame Street.

Susan and Gordon's adoption of Miles in 1985 (beginning with Episode 2122) was a major event on the show. Subsequent episodes dealt with the infant Miles' adjustment to his new family, and he would gradually become one of the familiar kids on the street. His birthday is December 4th.[1]

In a dream sequence in Episode 2313 (1987), Gordon and Susan imagine what Miles would be like as an adult. In this version of the future, the adult Miles is played by Kevin Clash.

As a teenager, Miles formed his own band (first seen in Episode 4079). In Episode 4112, he graduated high school alongside Gabi (despite the fact that the characters' respective debuts on the show as babies occurred four years apart). A flashback in this episode shows that Miles was shy on his first day of kindergarten.

Miles has worked as an assistant to Alan at Hooper's Store during Season 37. 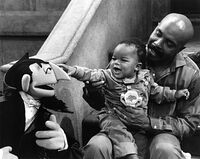 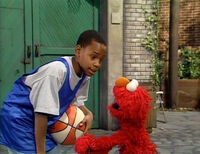 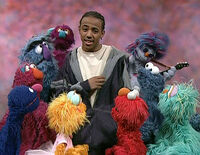