Miley Cyrus (b. 1992) is the star of the Disney Channel series Hannah Montana, and voiced Penny in Disney's Bolt.

She appeared in a February 2008 Disney Xtreme Digital video titled "Breaking News: And the Winner Is..." with Kermit the Frog and Pepe the King Prawn during the Muppets' coverage of the Grammy Awards ceremony. She invites the two over to her home, saying that her mom is a good cook.

Cyrus also appeared with the Electric Mayhem performing her song "G.N.O. (Girls' Night Out)" in Studio DC Hosted by Dylan and Cole Sprouse. 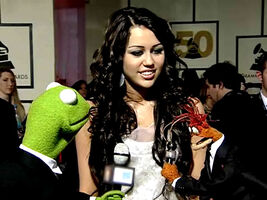 Miley Cyrus with Kermit and Pepe on Disney Xtreme Digital. 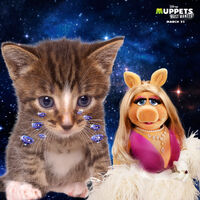 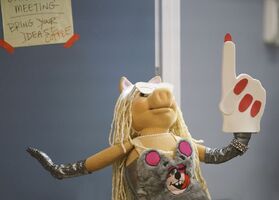 Piggy's "Swine Song"
Add a photo to this gallery

Wikipedia has an article related to:
Miley Cyrus
Retrieved from "https://muppet.fandom.com/wiki/Miley_Cyrus?oldid=1263651"
Community content is available under CC-BY-SA unless otherwise noted.