Mindy Kaling (b. 1979) is an actress best known for her roles as Kelly Kapoor on The Office and Mindy Lahiri on The Mindy Project. Among Kaling's other credits are voicing Disgust in Pixar's Inside Out, voicing Taffyta Muttonfudge in Disney's Wreck-It Ralph, and having a small part as a Smithsonian tour guide in Night at the Museum: Battle of the Smithsonian.

Kaling appeared with Gonzo at the Auto Club 400 in 2014. She also appeared in a "Word of the Day" segment with Elmo and the chickens in the 45th season of Sesame Street presenting the word "enthusiastic."

In 2015, she appeared in The Muppets episode "Single All the Way." In 2019, she recorded a "Sesame Street Memory" video for the 50th anniversary celebration of Sesame Street, appearing alongside Oscar the Grouch. 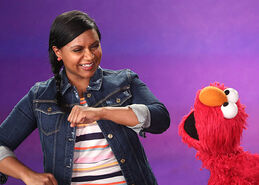 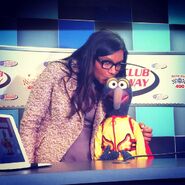 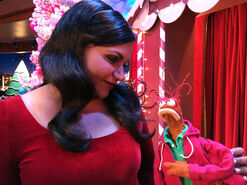 "Single All the Way"
Add a photo to this gallery

Wikipedia has an article related to:
Mindy Kaling
Retrieved from "https://muppet.fandom.com/wiki/Mindy_Kaling?oldid=1193896"
Community content is available under CC-BY-SA unless otherwise noted.