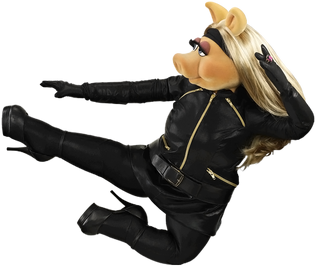 Miss Piggy can instantly fly into a rage whenever she thinks she's insulted or thwarted. Kermit the Frog has learned this all too well; when she isn't smothering him in kisses, she's sending him flying through the air with a karate-chop.

An early Muppet Show script called for Miss Piggy to slap Kermit, but (somewhat due to limitations of the puppet and her hand-rod controlled arms) puppeteer Frank Oz improvised a karate chop with an enthusiastic "hi-ya!" instead. Of the moment, Jerry Juhl recalled: "the place fell apart. It was like just instantly you knew you gotta see this again."[1]

"In one rehearsal, I was working as Miss Piggy with Jim [Henson], who was doing Kermit, and the script called for her to slap him. Instead of a slap, I gave him a funny karate kick. Somehow, that hit crystallized her character for me — the coyness hiding the aggression; the conflict of that love with her desire for a career; her tremendous out-and-out ego — all those things are great fun to explore in a character."[2]

Over the years, Piggy has performed enraged acts (and threats) of violence on various characters and celebrities. The "Muppet Morsels" feature on The Muppet Show: Season One DVD set attempted to track Miss Piggy's outbursts with a running count of her karate chops.