Miss Poogy is a new Muppet to appear in The Muppets. The character first appeared in the teaser trailer, "Green with Envy". She made subsequent appearances in the trailers after that, except for the second teaser, "The Fuzzy Pack". She is very different from Miss Piggy. Miss Poogy is very gruff and tough, and is know to carry pocketknives. Miss Poogy is also in Fozzie's tribute band, The Moopets.

The puppet used for Miss Poogy has also been used as Snorty in Pigs in Space: Deep Dish NineDeep Dish Nine on Muppets Tonight and was reused for different pig customers on Mopatop's Shop like Trevor and Ollie. 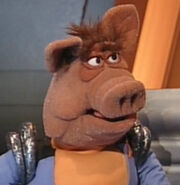 Add a photo to this gallery
Retrieved from "https://muppet.fandom.com/wiki/Miss_Poogy?oldid=594206"
Community content is available under CC-BY-SA unless otherwise noted.