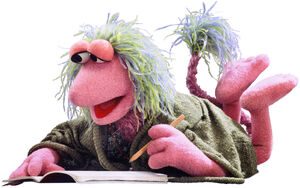 Mokey Fraggle is one of the five main Fraggles in Fraggle Rock. She has mauve skin with darker pink fur, long turquoise hair, and wears a long gray robe-like sweater, which is worn open. She wears a ring pull on a string of beads around her neck.

Mokey is a dreamer. She loves painting, writing poems, writing in her diary, meditating, or just enjoying her surroundings. Because she is the oldest of the Fraggle Five, she functions as the 'den mother' within the group. Mokey is very emotional and concerned about others. She's always ready to help a friend in need, even if it's a Gorg. Mokey's job is to pick radishes in the Gorgs' Garden, and she is a member of the Clinging Creepers Emergency Flower Defense League. She is quite dexterous with her tail, enabling her to wet the tuff to a point and use it as a brush for one painting, while using her hands to paint another picture with conventional brushes.

Mokey shares a room with her best friend Red Fraggle. Mokey often cares for Boober Fraggle, such as when she made a hat out of sticks to replace his supposedly "lucky" hat. She has a pet plant named Lanford. Mokey has a soft spot for the Minstrels, whose music she thinks is beautiful; her love of the Minstrels' music drove her to attempt to join the Minstrels once. She also believes that Gobo Fraggle is very brave and admires him for that, as expressed in "The Garden Plot." Sometimes, though, Gobo finds that she can be blinded to the truth in situations, such as when she was appointed the new Trash Heap.

Mokey was named after a childhood friend of Jim Henson. In the language of the ancient Fraggles, "Mokey" means "Put on your hat", which is the opposite of the meaning of Gobo's name.

One of Mokey's unique features is her eyelids. Except for the Storyteller Fraggle and the revised Gobo puppet, she is the only Fraggle who has movable eyelids. In place, they give her a dreamy or sad look, but they can slide up to show surprise, astonishment, fear and intensity. Mokey regularly switches back and forth between live hands and rod hands, depending on the requirements of the scene. Her right hand is usually performed by Trish Leeper.

As part of her winter outfit in the episode "The Bells of Fraggle Rock", Mokey was given an additional turtleneck sweater under her usual robe-like one. Kathryn Mullen liked the sweater so much that it became part of Mokey's permanent costume in "The Great Radish Caper".

Also, according to the episode "The Secret Society of Poobahs," she does not like the taste of Boober's okra soup. Both she and Red hold the opinion that okra is a disgusting food. During that episode, she didn't want to admit that the Poobahs were silly until near the end of the episode.

In "Mokey, Then and Now," Mokey prepares a play to honor Blundig with her acting out Blundig.

Kathryn Mullen performed with Mokey during the Just One Person chorus at Jim Henson's Memorial. Subsequently, Mokey made an appearance on The Muppets Celebrate Jim Henson alongside Gobo and Wembley during the finale.

In the past decade, Mokey has often been omitted from official Fraggle Rock merchandise and cover art, although items such as the 2010 Manhattan Toy plush reverse the trend.

Mokey appeared live at the 2013 Dragon Con, reprised again by Mullen. Donna Kimball performed Mokey for her non-speaking appearance in the "Do It Anyway" music video, a live appearance at the "Puppets for Puppetry" fundraiser event on September 24, 2016, and the 2020 webseries Fraggle Rock: Rock On!.

In the revival series, Fraggle Rock: Back to the Rock, Mokey (again played by Kimball) is given a makeover. Her hair is thicker, becomes a vibrant cerulean and is pulled into a bushy ponytail, she wears a necklace with multiple trinkets, her eyelids are raised (with a mechanism that allows them to completely close), and her open robe is replaced with a green blouse. The puppet is also strictly rod-handed. John Tartaglia commented on the design change during a Fraggle Rock Q&A on his Instagram stories, saying "Mokey is super creative and artistic and she wanted a new look - she's always in touch with the creative vibes of the Rock!"[1] Tartaglia went into more detail about the reasons for the redesign in an interview with MegaPodTastic.[2]