"Money" is a comedy song by Stan Freberg and Ruby Raskin that was performed by Jim Henson and the Muppets on Sam and Friends, in variety show appearances and on The Muppet Show.

On Sam and Friends, Henson's earliest television program, the Muppet characters lip-synched to a Mel Blanc recording of "Money".[1]

Henson began performing the song for variety-show appearances in the mid-60s, including on The Mike Douglas Show and The Tonight Show in 1966. In these sketches, the Muppet character (either Tommy or Rowlf the Dog) would grab various props, including a wallet, a piggy bank, and a bank bag.[1]

Dr. Teeth performed the song in episode 106 of The Muppet Show, jamming on a piano while extolling the virtues of money. At the end, Dr. Teeth yanks a slot machine-style lever on the side of his piano, which pays off.

In a 1992 Good Morning America appearance, an IRS auditor performed the song, backed by Fozzie Bear and a couple of accountants. 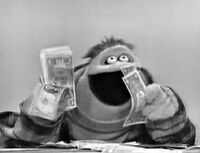 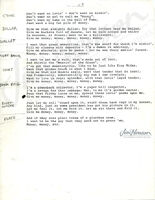 Lyrics for the song, with Henson's notes on props for the 1960s appearances