Monopoly is one of the best-selling commercial board games in the world. Players take turns moving around the board, and compete to acquire wealth through stylized economic activity involving the buying, rental and trading of properties using play money. The game is named after the economic concept of monopoly, the domination of a market by a single seller. It was first marketed by Parker Brothers in 1935.

Over the years, many specialty Monopoly editions have been licensed by Parker Brothers (and its parent company, Hasbro). From Star Wars to SpongeBob SquarePants, many pop-culture franchises have had the Monopoly treatment. Licensed Monopoly games have also been produced for many cities and colleges.

Monopoly: Jim Henson's Muppets Collector's Edition was produced by USAopoly in 2003. The gameplay is identical to the 1933 original, with Muppet names and images used on the properties, cards and money. Special pewter playing pieces were also produced.

Another Muppet version, Monopoly: The Muppets Collector's Edition, was released by USAopoly in August, 2010.[1]

In honor of the 35th anniversary of Sesame Street, Monopoly: Sesame Street Collector's Edition was released in 2004 by USAopoly. The gameplay was the same as the original, but with a Sesame twist. Special pewter playing pieces of the characters were included, and the board, cards, money and properties were changed to reflect the Sesame Street locations and characters.

The gameplay was released in 2006 by Servicios Mexicanos S. de R.L. de C.V. and was the same as the original, but with a Sesamo twist. Special pewter playing pieces of the characters were included, and the board, cards, money and properties were changed to reflect the Plaza Sésamo characters. The locations had themes as halloween, christmas, valentineday and easter.

Kermit the Frog appeared on the front box cover and gameboard of the second edition, and for the third edition, "Muppet*Vision 3D" was one of the places to land on in the game. 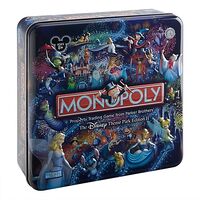 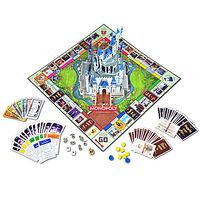 Wikipedia has an article related to:
Monopoly (game)
Retrieved from "https://muppet.fandom.com/wiki/Monopoly?oldid=1241971"
Community content is available under CC-BY-SA unless otherwise noted.