Monsterpiece Theater is a recurring Sesame Street sketch hosted by Cookie Monster as Alistair Cookie. The sketch parodies the PBS anthology series Masterpiece Theater, originally hosted by Alistair Cooke. In his earliest introductions, the urbane Alistair Cookie held an unlit pipe (which he usually ate by the end). Due to concerns over even the appearance of smoking, the pipe was later dropped, and scenes in earlier skits were re-taped (without the prop).[1] The segment premiered in season 9 and continued to appear on the show through season 33.

The segment brings a cultural element to the series by presenting stirring dramas based on classic literature, plays, or movies. As befits the title, many of the stars were indeed monsters, most notably Grover (who starred in more than a dozen skits). A few (notably "Me, Claudius" and "Upstairs, Downstairs") spoofed specific Masterpiece Theater series. The stirring theme music was composed by Sam Pottle. The segment was created by Tony Geiss.[2]

Similar segments have appeared in recent years sharing certain elements with the "Monsterpiece Theater" segments. In Season 37, "Dinner Theatre" premiered in which food themes are used to parody classic plays and musicals. The following year in Season 38, Cookie Monster bookended a sketch he describes as an "American Monster Classic." In it, Grover plays a monster who has forgotten his keys, in a take on A Streetcar Named Desire.

The Sesame Street CD-ROM games Grover's Travels, Elmo Through the Looking-Glass and The Three Grouchketeers are presented as Monsterpiece Theater episodes.

This segment has had at least three different openings, the first two of which specifically reflected the then-current Masterpiece Theater intros. Each opening change effectively replaced the previous title format on all sketches in most cases (old and new, though a 1998 airing of "The 39 Stairs" used the 1992 intro rather than the 1995 intro, possibly due to an editing mistake.)

One early skit, "Me, Claudius," featured no title card and opened on the camera panning across various statues before trucking over to Alistair Cookie as the theme was heard.

The first regular opening sequence had the title on a blue background, with a Union Jack flag as the P in "Monsterpiece", with the camera zooming out on the flag. A handful of sketches that originally featured this opening ("Upstairs, Downstairs", "Chariots of Fur", "The King and I," "Gone With the Wind") also ended with a shot of the title card. "Upstairs, Downstairs" is the only known instance (so far) of the title card zooming back into the "P" to close the segment.

Some time in Season 23, this opening was replaced with a longer opening, which panned around a room, showing pictures and books referencing past and then-current segments. The opening theme music was also re-recorded to sound more full and orchestral, heard in its entirety over audio of Cookie Monster eating cookies (mostly lines taken from a sketch involving eating cookies of various shapes, along with a belch and "Excuse me" from Christmas Eve on Sesame Street). The name of the skit was also spelled as "Monsterpiece Theatre."

In Season 27, another new opening (much shorter) had the title sliding in front of a computer-animated green curtain.

Most international productions simply omit the title card; however, the 1996 version of Barrio Sésamo had a custom intro for "Teatro de Monstruos." 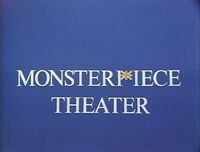 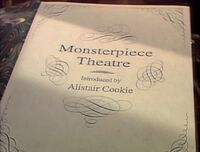 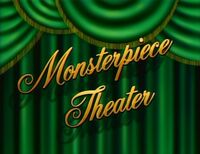 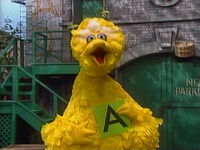 Big Bird sketches
Add a photo to this gallery
Retrieved from "https://muppet.fandom.com/wiki/Monsterpiece_Theater?oldid=1244398"
Community content is available under CC-BY-SA unless otherwise noted.