Mos Def (b. Dante Smith, 1973) is a hip-hop artist known for "conscious" lyrics, dealing with issues such as poverty, family, and the general struggle of the black community. He began his acting career appearing on various television programs, such as The Cosby Mysteries. He made a successful leap into film acting, appearing in films such as The Italian Job (with Seth Green) and 16 Blocks (with Bruce Willis). He has also appeared on a number of Chappelle's Show episodes, both acting and rapping.

Mos Def played Ford Prefect in the Creature Shop film The Hitchhiker's Guide to the Galaxy.

Mos Def also appeared with Kermit and Miss Piggy in 2004 on the red carpet pre-show coverage before the 56th Annual Primetime Emmy Awards. 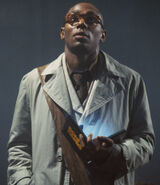 Mos Def in The Hitchhiker's Guide to the Galaxy.
Add a photo to this gallery

Wikipedia has an article related to:
Mos Def
Retrieved from "https://muppet.fandom.com/wiki/Mos_Def?oldid=1073921"
Community content is available under CC-BY-SA unless otherwise noted.