Mother Goose and Grimm is an internationally-syndicated cartoon strip by Pulitzer Prize winning cartoonist Mike Peters. Since it was first syndicated in 1984, Peters has received a National Cartoonist Society Reuben Award for 1991, and a nomination for their Newspaper Comic Strip Award for 2000.

The strip has made many references to the Muppets, including the following:

Additionally, many of Peters' editorial cartoons, independent of the strip, have also featured Muppet mentions. 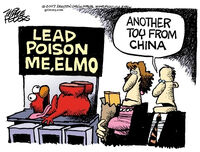 An animated series ran on CBS for two seasons from 1991 to 1992 (renamed Grimmy for the second) and included one Muppet reference.

Start a Discussion Discussions about Mother Goose and Grimm