Motorcycles are occasionally seen as transportation in Muppet productions.

Droop wins Miss Mousey's heart by picking her up on his motorcycle in "Froggy Went A Courtin'" on The Muppets Valentine Show.

"I Get Around", the opening number for Episode 415 of The Muppet Show, featured Miss Piggy, Link Hogthrob and other Muppet pigs riding motorcycles. The producers insisted on using real operational motorcycles for the scene, and they had to order Muppet-sized motorcycles from Pittsburgh to be flown to the studios in London. Once the motorcycles arrived, the producers learned that they couldn't run the bikes; safety regulations wouldn't allow gas vehicles to run inside the studio. The special effects department fit two electric drills to each bike wheel, to make it look as if the bikes were running.[1]

Miss Piggy rides a motorcycle again in The Great Muppet Caper. After taking over a truck that runs out of gas and finding herself stranded, the back of a truck opens and a motorcycle sails out. Miss Piggy rides the chopper to the Mallory Gallery, jump-crashing through a window.

Gonzo rides a motorcycle as part of his act in The Muppet Show episode 315. His act involves riding a motorcycle up a ramp and into Statler and Waldorf's box. After failing the first time, Gonzo tries to get it working throughout the show (at one point getting the take-off perfected while the landing still needs work), and eventually performs his act to great success later in the show.

Big Bird operates a motorcycle, with Barkley in the sidecar, in Big Bird in China.

When Kermit the Frog interviewed Grover Knover in Out to Lunch, the latter is meant to jump the length of the Grand Canyon, but it's Kermit who inadvertently ends up on the motorcycle and subsequently plummeting to the canyon floor.

Cookie Monster also rides a motorcycle, according to the audio sketch "The Listening Game" from the album Havin' Fun with Ernie & Bert.

The unfinished character Carburetor Jones would have always appeared atop a motorcycle.

The On the Road with Kermit and Miss Piggy Motorcycle Figurine Collection, is a series of collectibles created for the Hamilton Collection, with the Muppets riding motorcycles.

In episode 4137 of Sesame Street, Action Dog, the character in Abby Cadabby's book The Wild Adventures of Action Dog, rides a motorcycle (which Telly thinks is a herd of lactose-intolerant antelope that just ate cottage cheese). 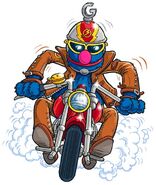 Grover's chopper motorcycle, as also illustrated by Ernie Kwiat
Add a photo to this gallery

Retrieved from "https://muppet.fandom.com/wiki/Motorcycles?oldid=1282488"
Community content is available under CC-BY-SA unless otherwise noted.