Gordon addresses him by his first name, Mortimer, in Episode 0171. 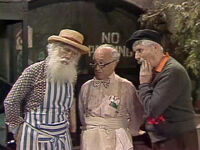